The Mini Brand Has Gone Missing….Or, Has It?

We recently had a chance to test drive the all-new 2015 Mini Cooper. The good news is that the new, improved and highly refined Mini is now one of the best premium small cars in the world. The not so good news is that it’s no longer as unique and fun as the Minis before it. As Mini continues to expand its product range into sedans and SUV’s, and as BMW seeks to grow small FWD cars off common vehicle architecture, it needs to make sure it maintains leadership in fun-to-drive cars that represent the core of the brand promise. What’s more, while listening to customers for ways to improve the car, they also need to preserve the attributes that make Mini advocates so loyal and passionate for the brand.

The all-new 2015 Mini has just recently gone on sale and has been pretty well-received by the popular press and buff books. That said, it’s not getting the same kind of love from “Mini Nation”; the bread and butter loyalists that write the checks and spread the Mini gospel. Their main issue with the new Mini is it’s “mini-ness”…or, more appropriately its’ increasing lack thereof.

With each subsequent Mini Cooper generation, much like VW’s Golf (and even the Mustang recently), the Mini hatch has grown in size and weight taking on more adult-friendliness with better room, ride and comfort while seemingly leaving out more of the fun-loving, playful pup of the original 2000 model year re-incarnation.

At first glance, the Gen III is not huge, but it’s certainly not “miniature” either. This becomes more obvious when comparing it in the context of Mini’s design evolution. In a nod to increasing industry pedestrian crash standards, the new Gen 3 Mini stands taller, the front overhang is longer and the car gains a bit more cartoonish grin as well. Make no mistake, the new Mini maintains its iconic shape but with each generation it moves a bit further away from its original and more minimalist retro-futurist design. 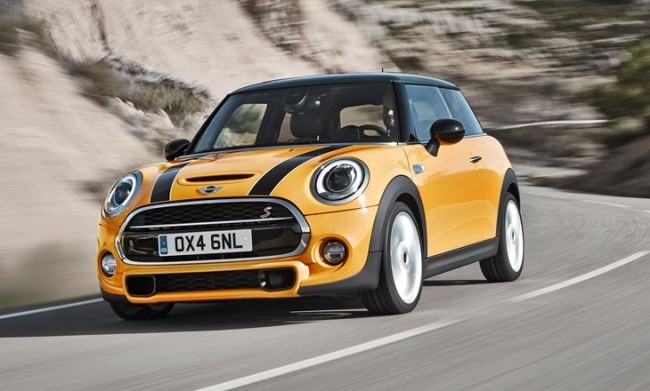 Get inside and the first thing you notice is a much bigger cabin and higher cowl height more similar to other small cars on the market. And your passenger now sits further away from you versus “right next to you” in the best of the British motoring small car tradition. Surely, many owners asked for a bit roomier interior through the IQS surveys and Mini has certainly complied; indeed, the boot area is a claimed 50% larger and knee room is equally improved. We’ve heard that a few Mini owners have also complained about the classic throwback instrumentation of Gen I and Gen II models and those complaints showed up on J.D. Power scores. So those who had issues, as well as new customers to the Mini brand, will appreciate the more conventional placement of the speedometer, moving from the big round dial in the middle of the dash to a small pod behind the steering wheel like most other small cars.

Similarly, the window controls move from their fighter pilot in-dash toggles to the more traditional in-door location and the cheap plastics and rat fur headliner have been replaced by near-BMW quality soft touches. The new Mini control panel is cute and functions nicely but it’s possibly a bit too gimmicky featuring a big ring that lights up with driver interaction for heating & cooling and radio volume. 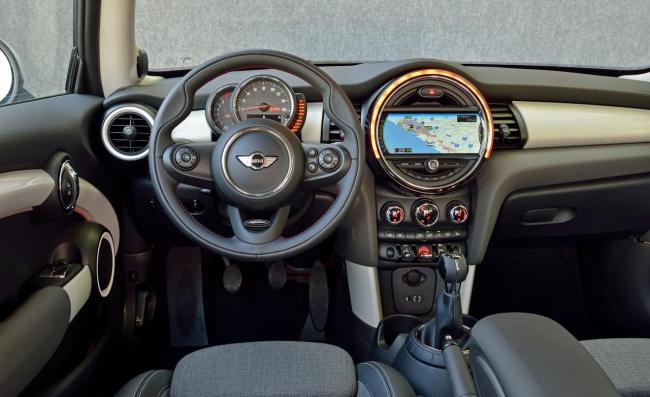 Our first test car was a Volcanic Orange Cooper S equipped with a BMW-developed 2.0 liter 4 cylinder and six speed automatic with paddle shifters (a 6-speed manual was sadly unavailable). The new S powerplant puts out 189 HP while delivering a claimed 28MPG city and 40MPG highway and 0-60 sprints in 6.5 seconds. We immediately drew comparisons to the outgoing 2013 model and noted that the new car is more solid-feeling but it seems to have a “taller” over the road feeling which takes it one more level away from the glorious handling of the original Mini. In Sport mode, the steering can dial up a pretty nice on-center feel but the size and added weight of the new car creates more of an isolated experience and a general loss of connectedness to the driving experience.
We have been critical of the second gen Minis losing a bit of the go-kart feel of the first gens and we see more of the same with this car. However, we feel the new BMW sourced engine is definitely a keeper offering the most refinement and power throughout the rev range of any Mini engine offering to date. The paddle shifted 6-speed manu-matic is also a significant improvement and offers near DSG responsiveness and faster acceleration than the manual tranny Mini. Punch the gas and the new Mini exudes a nice deep roar with a hint of turbo twist. Hit an on-ramp and the Mini plants its feet and begs for more. Still, while this car can outhandle most any small car, we miss the more juvenile “wild thing” handling of this Mini’s older brothers that made it more unique than any car on the market.

We also had an opportunity to test drive the 3 cylinder base coupe and came away maybe even more impressed by this entry-level car versus the nearly $4,000 pricier S model. Powered by BMW’s new Twin Power 3 cylinder turbo this model is a lot of fun to drive and definitely a better bang for the buck. Mini shaved a whopping 2 seconds off the outgoing base coupe’s 0-60 time with this new set-up and while 3-pot motors have been a tough sell, we think this one is a gem. It’s basically a 3.0 liter BMW inline six sliced in half and in addition to surprising smoothness and boost, serves up 30 mpg city and 42 mpg highway. The base Cooper is on sale starting at $20,745 and offers a lot of premium small car virtue.

Kudos to BMW and Mini for making a damn fine machine that sets a new bar for premium small cars. The Mini has finally been fully injected with “BMW-ness” and we think it will be a solid performer in the showroom. But again, we feel these cars miss the mark as better Minis. Overall, much like parent company BMW has recently compromised their “ultimate driving machine” product delivery, we feel Mini needs to keep an eye on their brand DNA by building the most fun-to-drive products in their segments.

We’ve heard from our sources that the zesty Mini recipe may have been diluted to address the aforementioned ”Things Gone Wrong” customer complaints in an effort to improve IQS (quality) scores and as such gain more loyalty and conquests for the brand.
But if that’s the case then perhaps BMW overlooked the other critically important customer pleasing aspect of quality; “Things Gone Right”…the many aspects of quality that make people smile and often overlook a car’s shortcomings to a certain degree. The Mini Cooper is still fun-to-drive but it has lost its highly differentiated and relevant brand position as the King Hooligan of the hot hatches.
We believe BMW’s emerging platform strategy has a lot to do with this new and more premium Mini (both good and bad). The sweet motors, the craftsmanship and refinement are all BMW. That’s great. And we get the goal of leveraging common platforms and architectures for efficiencies. But that’s also the rub. BMW brand will soon be in the FWD car business with their upcoming Active Tour 1 Series. We hate to say it but we sniff a hint of badge engineering here as this Mini seems more like what a BMW-branded compact car would be (and soon will be) like. Again, these are wonderful small cars, but can we please get our rough-edged Mini back?

But perhaps we’re sounding the alarm to soon. After all, the crew in Bavaria have answered the critics by showing us how they steered BMW back to its Ultimate Driving Machine roots with their latest generation of 2 and 4 series cars. And certainly they can do the same with Mini.

As BMW has brought us the 2-Series as a spiritual successor to the 2002 and original 3-Series, we’d like to see a new and smaller nameplate entry slotting beneath the more grown up Mini Cooper and perhaps joined in the showroom by the uber cool Rocketman concept, which debuted at the 2011 Geneva Motor Show and that one day soon could be that car.

Couple the Rocketman to the recently teased Mini Superleggera Vision roadster and Mini is back on track with some new swagger that will surely please newcomers and loyalists alike.