Taylor Swift: 2015 Marketer of the Year. And This is How She Did It.

Posted by 360kevman on December 31, 2015
Posted in: Uncategorized. Leave a comment 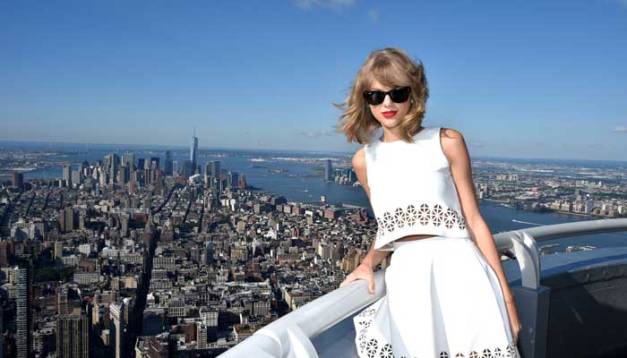 Over the last year, beyond setting another record for album and concert sales, Taylor Swift took the next step in moving her personal brand forward with a sharp left turn, deploying strategies and tactics worthy of the best CMO’s. Along the way, she shed more light on the future of marketing and having a say about the future of the music industry. And for that, she gets my vote for marketer of the year. Here’s how she did it.

She Knows Her Brand, Nurtures and Protects It.

At the very center of Taylor Swift’s brand universe, it’s about the idea of goodness and excellence. In a world filled with fear, darkness, mediocrity and celebrity bad behavior, Swift wants to be the good girl that cares, connects and makes things better. This, beyond uncanny good looks and talent unseen since the likes of pop icon Michael Jackson, is what makes her different from her often salty and sultry pop rivals Katy Perry, Ke$ha, Lady Gaga and Miley Cyrus.

Swift is always “on-brand”. From the clean cut of her clothes, to the mom-approved make-up and always hidden belly-button, to the up-close and personal aspect of her storytelling.

But there’s also a strong element of protection and control underneath it all. Indeed, a security force fills a Manhattan loft apartment next her own, and an “always on” image strategy rivals a presidential campaign. And from a media perspective, Swift is writing the book on brand publishing; she doesn’t wait for a media world to make news she can’t control, she takes her message to a mega million community of followers that she’s nurtured over time.

Indeed, for the release of her 1989 album she created a series of controlled minute and a half teaser interviews that aired where she dictated (You Tube, Twitter, Instagram) versus the common morning and late night broadcast interview circuit where the questions could get off script with her image re-branding. Swift is literally taking the idea of owned media and PR to new places.

What’s more, she’s created a posse (#squad) of A-list models and celebrities that fit the Swifty brand guidelines and elevate her stature into solid A-lister territory. It’s a sort of 180 spin on the once famous “Rat Pack” led by bad boy Frank Sinatra, in this case association with tragically cool (but safe) hip chicks and cool guys that “got it goin’ on”. Swift runs with this cool, (but clean) crowd, where membership is on her terms and at her discretion. And of course her brand alliance partners also check the boxes of approachable music pop star. Keds, Target, Diet Coke and Papa Johns. Leave Patron Tequila for Miley Cyrus. These are all credible and Taylor-aligned. Let’s move along now…

Swift’s latest album 1989 is a bold move, and the next step from her country-pop hybrid album “Red”, into the world of full bore pop musician inspired by late 80’s acts like Phil Collins, Madonna (Like a Virgin) and Annie Lennox. For its launch, Swift announced she would no longer attend Country Music Award shows and would shun country music stations in launching the album. Her managers begged her to make a few “country cuts” to cross-promote the album to country stations but she wouldn’t budge. Taylor Swift burned the country music bridge behind her. According to Swift, “You can’t catch a rabbit if you’re trying to chase two”.

But more than that, Swift was the industry champion that took on Apple with a public announcement that she wouldn’t release her 1989 album on Apple’s non-paying music stream service. She publicly called out Apple saying their policy generally cheated new artists from 3 months of revenues. No other artist had the audacity to speak out against powerful Apple but she did. And won. In a reverse decision, Apple changed their policy. Similarly, Swift pulled her music from low-paying Spotify and rallied other artists to get paid their worth toward a new model for music publishing. Suddenly, Swift was a thought-leading influencer and business voice for an industry, earning media attention from an older audience that sees her in a leadership light. Similarly, a more mature is Taylor is adding a subdued form of feminism to the Swift platform. Earlier in her career, Swift deflected questions about feminism because she didn’t want to alienate male fans. But these days, she’s proud to identify herself as a feminist. According to one industry observer, “Swift has always been a feminist whether she called herself one or not: she runs her own company and she’s creating music that connects to other women instead of creating a sexual persona for the male gaze, and no one is in control of her. If that’s not feminism, what is?”

She Treats Her Fans (Customers) Like Insiders and Friends

Swift has flipped the script on the separation between powerful artist and powerless fan. And this is a key part of her secret sauce. Swift is equal parts songstress and a best practice in strategic marketing and consumer engagement. She creates an emotional connection to her fan base through relevancy and transparency. And this is a critical link that few artists (and most brands for that matter) ever achieve.

She is the tribe leader of Swifty Nation. And nobody uses social media better to bring fans into her world of what she’s working on next, who she’s hanging out with and even the latest antics of her cats. She’s become a fan of her fans by lurking social media, responding to their posts, inviting them to concert meet-ups and even sending personalized notes and Christmas presents. The key difference, and takeaway for brands, is using social media as an interaction tool versus another channel to spread news. And it doesn’t hurt to take the celebrity level down a bit, while upping the approachability quotient, by poking fun at your own bad dance moves in a Shake It Off video. Or, giving relationship advice and creating a custom break-up playlist for one of your heartbroken followers in Swifty Nation (yeah, she really does that).

Further, Swift’s team uses media and analytics to understand who her fans are, what they do and what they want. Swift gets the media consumption habits of Millenials and how they grew up in the sharing culture. As such, her Twitter feed is full of retweets of undiscovered artists covering her songs, of wedding videos using her songs and fan collages doing everyday things. During Christmas, her social media team scouted a select group of 30 fans (i.e. #taylurking) to understand their lifestyles and needs and wants. Then she created gift packages with handwritten notes and in some cases personally delivered them to their homes (#Swiftmas). Of course, this created more video documentary material and the requisite earned and owned media coverage. As such, the Taylor brand beast is fed and grows. Rinse and repeat. And watch what Taylor does next in this space.

Everyone and Every Brand Can Learn from Swift

In 2016 let’s understand what our brands should mean to consumers and align an organization to creating the kind of deep connection Swift has cultivated with her community. And to do that, let’s try to break the mold of traditional “one way” marketing that consumers are increasingly tuning out. Let’s work harder to have meaningful engagements with consumers and use social media and brand content in ways that enrich consumer experience. Let’s engage consumers like Swift treats her fans.

In the end, there seem to be a tale of two Taylor Swifts (if not more). One is a young woman that transitioned from a whirly girl country music star writing songs about boys, to an adult pop sensation that steered a musical career transition like few others.

The other Taylor Swift is a shrewd businesswoman that is heading a brand movement and leading the conversation about the future of marketing and the music industry. Some skeptics have questioned the authenticity and ambition of the Taylor Swift brand. What cannot be debated is that she’s a mega-force that truly knows what she’s doing.