As usual, brandmachine attended press days at the 2015 NAIAS. We talked to many industry insiders and here’s our annual take on the show with some key themes, details and insights about the most significant vehicles.

Some industry observers are calling for another robust year of industry sales fueled by pent-up demand, cheap gas and the upswing of the U.S. economy. You could see and feel the good mood on the show floor from the smiling faces and some of the iron that was trotted out on the floor.

You know times are better when not one, but two supercars are trotted out on the floor as production models. Without question, the showstopper came from Ford by way of the 2016 Ford GT. The car is simply stunning, and it was the buzz all around the show; it was also a spectacular surprise that nobody expected. We spent some time with the Ford GT design team led by Christopher Svensson and turns out the vehicle program is a great skunkworks tale. The program was only known to about 10 senior execs as the GT team toiled in the basement of Ford’s Product Development Center. From sketch to concept it was brought to life in a little over a year. Sure, some folks dinged it for the fact it’s now powered by an EcoBoost V-6 versus an All-American V-8 but the car is a technological tour de force and took home the Eyes On Design award for best production vehicle.

Down the aisle, we got our first look at the Acura NSX. We’ve waited years on the promise that Acura was serious about building it and it’s nicely done and available soon at your Acura dealer for a respectable $150,000 (Jerry Seinfeld was on-hand at the reveal and will take delivery of the first one). The car is well turned out but you almost felt a bit sorry for Acura that the Ford GT totally stole its thunder and put a spotlight on how long it took Acura to deliver on the concept. Nonetheless, both of these cars put some buzz into show that was maybe a bit muted otherwise.

With regular unleaded dipping under two bucks a gallon, Americans are expected to start looking at bigger pick-ups and SUV’s again. Ford and Dodge both showcased some specialty trucks that put a capital B in Bad Ass with the Raptor and the Ram Rebel. Of course, the big news remains the aluminum intensive F-Series that most consumers will see in the flesh for the first time. The new Nissan Titan was revealed here but most agreed it is a little underwhelming outside of its diesel power.

There’s also no stop to the booming crossover segment and nobody has higher volume-lift hopes in this space than VW which has been late to the party. The Cross Coupe GTE looks pretty solid cutting a unique shape and interior refinement that gets VW back to where it should be. 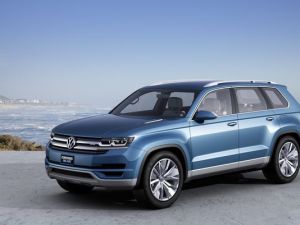 In turn, with cheap gas, the bloom is temporarily off the rose for hybrids and pure electrics. So that was a bit of a buzz kill forChevy’s worthy update to the Volt and a surprisingly interesting reveal of the Bolt (yes, we said Bolt, not Volt). What may live as the most questionable and confusing nomenclature pick ever (Volt/Bolt) is really an awesomely packaged little car with a pure electric range of 200 miles and a price expected to dip under $30,000 after credits.

Cadillac, Lincoln and Buick are making strides to compete with premium brands. Cadillac showed the “take direct aim at the BMW propeller” 200 MPH CTS-V, Lincoln is taking a decidedly more subtle and Audi-esque styling approach first displayed in the MK-C and now echoed in the bigger MK-X. Lincoln should get a serious volume and profit lift from these two money-maker crossovers but it was Buick that made the most noise with the Avenir concept as a beacon for the future brand.

We spent a fair bit of time with the Buick design team and learned that the design brief was to create “beauty” and this big and voluptuous shape hits the target. Yes, we’ve seen these familiar Buick graphics before but the Avenir makes the clearest design statement for the tri-shield brand since Bill Mitchell styled the ’63 Riviera. Buick took home best concept and best interior in the peer judged Eyes On Design competition and we bet this flagship joins the Omega platform Cadillac CT6 flagship soon. 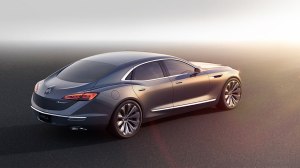 Design Innovation Is an Inside Job

It occurred to us walking the floor as well as in conversations with various designers, that the bigger design thinking is happening with vehicle interiors versus exteriors. Look around and you’ll notice an unfortunate “cookie cutter” effect with mainstream nameplate exterior design that is bothersome. While it seems nobody makes an ugly car anymore, it appears that everybody is working the same brief that combines government safety design standards, with aero shapes and seen-it-before luxury design cues. Oh yeah, and don’t forget the curiously ubiquitous hexagonal grille shape. In turn, we see the future of the autonomous (self-driving) and connected-car driving new creative thinking but it’s with car interiors. Think about it, the Consumer Electronic Show is where carmakers are revealing some of their most interesting innovations—but it’s about technology inside the car. Indeed, what will you do inside the car someday if you may not have to drive? Mercedes showed a look at the future of mobility in this regard. The F 015 concept can be operated autonomously or manually. When the vehicle is in fully driverless mode, the four motorized lounge chairs can be rotated to allow face-to-face conversations. When required for manual operation, the driver’s chair swivels back to face forward. The car as a mobile living space. Of course this innovative car didn’t debut in Detroit, it was shown first at CES.

One final thought on the show. Buick and Ford should be commended for bringing back an old idea to car shows and that’s the element of surprise. In a world where spy photos and rumors are leaked months in advance of a product reveal it’s great to be wowed with a little of the old Steve Jobs’….”and one more thing” pizazz. Well done. And let’s see other brands keep things under tight wraps ‘til showtime.

Brandmachine is in the brand solution business and going to newer and better places.
www.360brandmachine.com